When avid golfer Kraig Lusnia isn’t looking down at the golf green to line up a putt, you’ll probably catch the astronomy buff gazing up at the stars.

He’s amassed an impression collection of telescopes to study the stars. Even as a little kid he loved TV documentaries about planets and the mystery of the cosmos.

The guy who loves to be outside — day and night — found his perfect career fit as a landscape foreman at Greenscape, Inc. 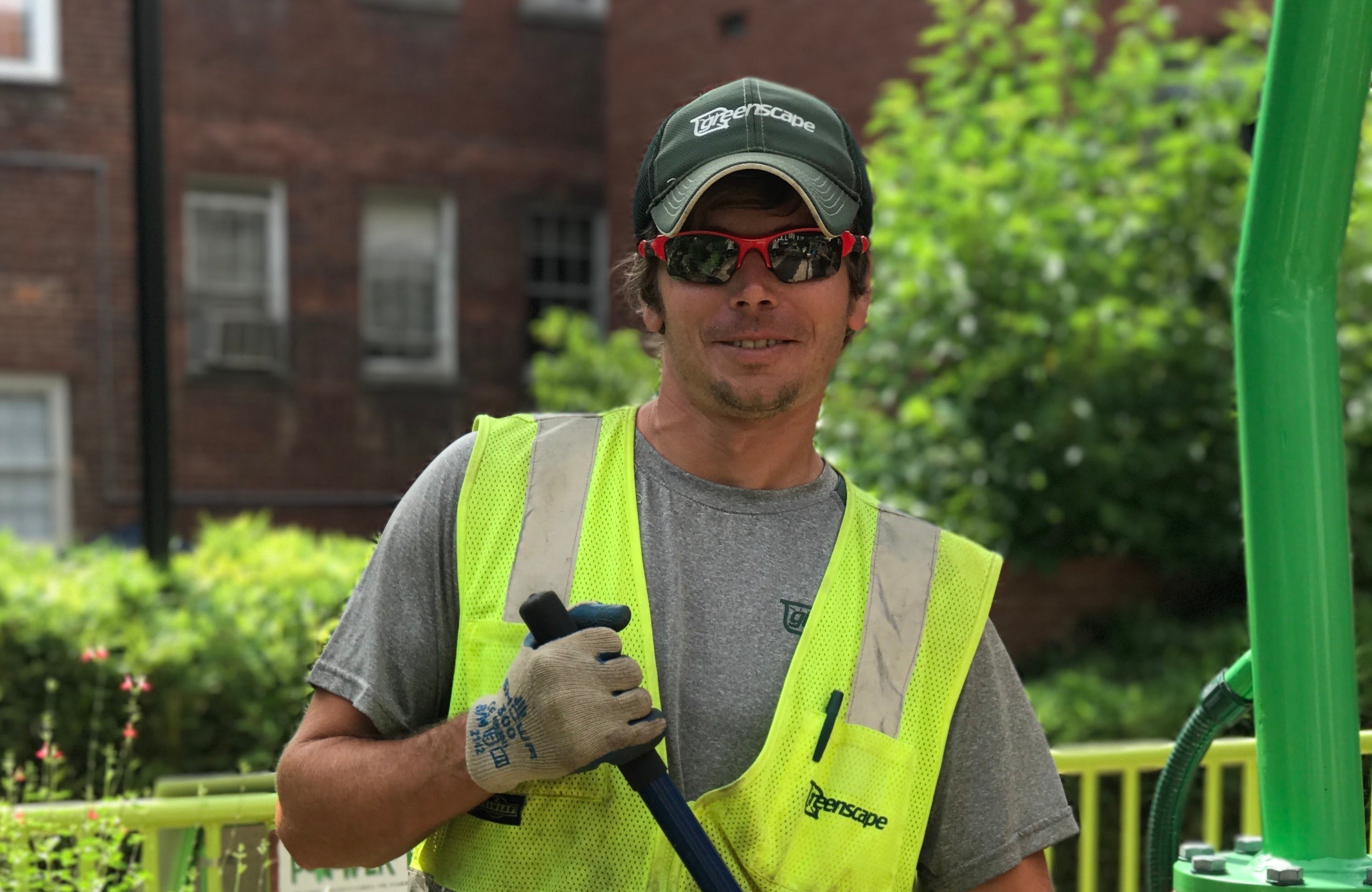 “When I got out, I dipped my toes in the college atmosphere,” he says, “But school just wasn’t for me.”

He got a job at Zergott Landscaping in Ohio working in hardscape, constructing patios, walkways and retaining walls.

“I loved it,” he says. “I’ve always loved building things with my hands. I love the satisfaction of seeing a job when it’s finished, of seeing the customers excited about it, and getting to present the finished project to them.”

He worked for nearly a decade at Zergott, most of that time as a landscape foreman, before starting at Greenscape in 2016.

“I love the teamwork of a small group of guys working together to get a job done,” he says. That’s the thing he liked best about being in the military, he says — “working with a close-knit group of people to problem solve and accomplish a task.”

As landscape foreman, he leads that teamwork — often with a shovel in his hands.

“Leading by example sounds like a cliche, but if I’m working hard and sweating as opposed to standing around telling everybody else what to do, the job gets done a lot better,” he says.

Everybody at Greenscape knows exactly what their job is and how they fit in the team, he says.

“It’s a very corporate environment here, and I like that,” Kraig says. “Everything is super organized, with great leadership in every division. Everybody knows their role, so you know exactly who to go to when you need something.”

“There are a lot of good things about Kraig, but one of the biggest things is he’s patient,” says Tim Camden, Greenscape project manager and Kraig’s supervisor. “In this work, things change all the time — you never know what to expect. Customers want things done right now, and we want to deliver that. Kraig’s just really easy going and goes with the flow. That makes everybody’s day better.”

Don’t look for Kraig standing around, or sitting in his truck, he says.

“He works more than he barks orders,” Camden says. “He really gets in there and works hard, and he gets respect from his guys because of that.”

Camden tells about a recent weekend when Kraig took a couple of his crew members bowling.

“I can’t think of any other foreman who’s done something like that,” he says. “Honestly, he’s just a good guy, all around.”

Kraig and his wife, Emily, have been together for 13 years and married for three. They’re expecting their first child, a girl, in July.

Their two dogs are their current babies. Zeke is a beagle, German shepherd, pitbull and coonhound mix. Kraig  knows, because he had Zeke’s DNA tested.

And there’s puppy Jake, a black lab and golden retriever mix who mostly looks like a black lab.

He and Emily love taking the dogs to the beach or to walk the trails at Jordan Lake, west of Raleigh.

Lately Kraig’s been watching a lot of YouTube videos on the best ways to introduce a new baby to the family dogs.

“Anyone who knows me knows I can be a bit of a goofball at times,” he says. “I like to live in the moment. At no point do I want to be just drudging through, wanting the day to end. I try to make it entertaining.”

He was taking a break from work at the Hawthorne Six Forks apartment complex, where Greenscape crews were installing an irrigation system, planting all new plants, from hollies to liriope, doing drainage work and laying sod.

“Right now it looks like a bomb went off,” he says. “Then, as we close in on the end, in the blink of an eye it’ll look fantastic — new plants, lush green grass, the finishing touch of mulch. It’ll be a huge difference. I love seeing that happen.”