When 10,000 people a day pass through your property, it has to look good. For a hospital, surroundings are even more important. A stay in the hospital can be a stressful experience. A hospital also welcomes new lives into the world and marks the start of recovery for many. Creating a healing environment is crucial.

The nonprofit health care system founded and based in Raleigh, N.C. includes three full-service hospitals with 919 beds along with three Healthplexes, two Medical Parks and more than 50 physician office locations. WakeMed is the leading provider of health services in Wake County, employing more than 9000 people.

“It’s like a little city, in and of itself,” says Brad Stevens, director of facility services for WakeMed Raleigh Campus. “We are open 24/7..”

“When a patient or visitor drives up, it has to look clean, neat, well taken care of,” he says. “If it’s not, you won’t feel comfortable. You’ll think, ‘If it’s not clean outside, it won’t be clean inside.’”

Time To Spruce Up


WakeMed Raleigh Campus opened its doors in 1961, and the years were starting to take a toll on its appeal, Stevens says. 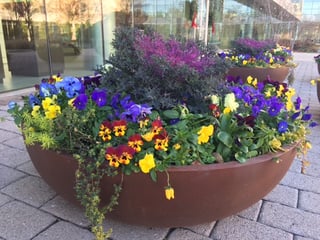 “We had to refresh things, inside and out.”

WakeMed hired Greenscape, Inc. in 2014 to manage landscape services for WakeMed Raleigh Campus. Then, in 2016, the system contracted with Greenscape to manage all 16 of their system facilities across the Triangle, from physician offices to corporate headquarters.

Flowers For Beauty And Visibility


While first impressions are important at WakeMed, so are lasting impressions, says Leslie Herndon, vice president of operations at Greenscape and the account manager for WakeMed.

“For patients with extended hospital stays, this is their home,” she says. “The landscaping is visible to patients from the inside, too.”

Greenscape added colorful flower beds at all the major entrances. Large pots of intriguing plants and flowers — about 70 in all — add interest to entrances and several courtyards. 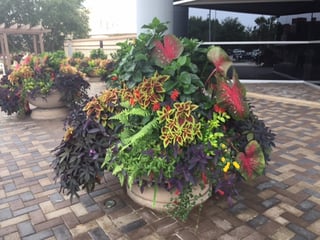 Flowers change with the seasons, so they're always fresh and healthy.

“Signage needs to be very visible here,” Herndon says. “People don't want to hunt around for the place they're going.” Bright flowers add extra visibility and appeal around signs.

Crews removed old, outdated landscaping and did a complete renovation along the main entrance on New Bern Avenue.

Meticulous landscape maintenance includes frequent blowing off of all entrance areas to keep them neat and free of debris.

“They’re here five days a week,” Stevens says of Greenscape crews. “That’s what it takes, to meet our expectations.”

Welcome To The Courtyard


Restful, easily accessible courtyards are a highlight of WakeMed Raleigh Campus, and get a lot of use. Patients, visitors and employees dine outdoors. Rehab patients rest and recover. Families lounge on the cool grass and on benches and enjoy the pots of colorful lantana, coleus, caladium and angelonia. Employees pass through daily on the way in and out from the parking decks.

May through September WakeMed hosts a weekly farmer’s market in the main outdoor courtyard, where patients and employees buy fresh peaches, broccoli and cherry tomatoes.

Trees, shrubs and flowers create a cool, serene vibe, and one courtyard features a small waterfall.

“People can relax as they enjoy the landscaping,” Stevens says. “It makes a big difference in the patient experience, and the family experience.”

The high-use areas pose a challenge for Greenscape crews, who time their maintenance when the fewest number of visitors are there.

At one location, a courtyard isn’t accessible from the outdoors. So Greenscape crews transport their mower and other equipment on a secure covered cart, wheeling it through hospital corridors and the elevator to access the courtyard. 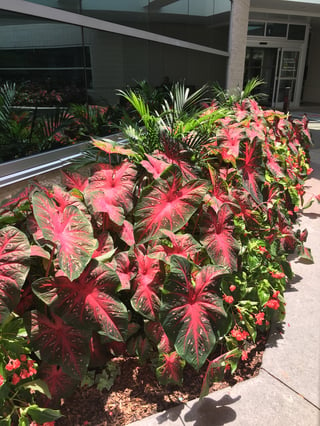 Greenscape crews are on site five days a week, so they know the property well. If visitors ask them for directions, they can assist.

When pedestrians pass by, crews stop mowing or blowing until they’ve passed.
“I’ve had other companies blow grass right onto my car,” Stevens says. “They’re responsive and respectful to customer needs, not just their needs.”

All of this is common courtesy, Herndon says — and part of their job.

“Timing is important, knowing when it’s OK for us to make noise and when we can't make noise,” Herndon says.

Plants On The Roof


WakeMed Raleigh Campus  also includes a green roof on the canopy of its Main Visitor Entrance. Greenscape didn't install the 2,300 square foot feature, but it now falls under their care. Installed in 2009, the plant-covered roof is highly visible from patient rooms and hallways.

“It isn't easy to take care of,” Stevens says. “They enhanced it and made it a lot better.”


Snow removal is a crucial part of the services Greenscape provides for WakeMed. Crews are on call 24/7, Herndon says, working double shifts during severe weather.

Large truckloads of ice melt are applied to ensure nobody slips and falls.

Before big storms move in, Greenscape crews arrive ahead of time and stay in a hotel a few blocks from WakeMed.

There are two helipads on the property — one atop a third story building for the heart center, another on the ground for the emergency department. It’s crucial they stay clear of snow and ice.

Another winter challenge: the hill that leads up to the emergency department. In past years, it’s become such a treacherous slick of ice that ambulances couldn't safely navigate to the drop off, Stevens says.

“Greenscape keeps everything clear and safe for us,” he says.

Contributing To The Community


WakeMed is the lead sponsor of WakeMed’s PlayWELL Park at the Poe Center for Health Education in Raleigh. The innovative 1.5 acre health education playground teaches kids about health as they play, sliding through giant arteries in the physical activity treehouse, climbing a nutrition wall to learn about food choices, activating musical chimes as they monitor their pulse.

“We do it as part of our partnership with WakeMed and to further our vision of building and creating spaces where people live, work and play,” Herndon says.

None of this happens without frequent communication. Herndon meets with Stevens in person every other week, as well as with property managers for the other WakeMed locations. She also has a project manager for the Raleigh Campus who's available for consultation as needed.

“We’ll walk the grounds and talk about what's going well, what needs to be improved,” Stevens says. “They’re willing to do anything we want, on a moment's notice.”

Improving The Landscape, Day By Day


“I want to keep making the property look better and better,” Stevens says.

“Our vice president noticed when we changed to Greenscape — he said the grass was greener,” Stevens says. “People tell me how pretty the flowers look.”

“I’ve been on our other properties, too,” he says. “They’re all as beautiful as this one.”

“Greenscape is really an extension of our staff,” Stevens says. “They make things easy for us. Hats off to them — they do a good job.”

“Greenscape is really an extension of our staff. They make things easy for us. Hats off to them — they do a good job.”