More than a shopping destination, Cameron Village is a beloved fixture of Raleigh history. The retail center has been so much a part of residents’ lives for decades, the Cameron Village website devotes a whole section to peoples’ fond memories of the place.

“Cameron Village is definitely rooted in the fabric of the history of Raleigh,” says Jay Kanik, assets manager for North Carolina Regency Centers, which owns Cameron Village. “It’s always had a tremendous draw, on a regional basis.”

Visitors shop for clothing, fine jewelry and luggage; dine on Japanese cuisine or eat at the first-ever two-story Chick-Fil-A;  gather for events at The Meet Up Space; enjoy a yoga class.

Evolving With The Times

When it opened in 1949 with three stores and one restaurant, Cameron Village became the first shopping center between Washington D.C. and Atlanta. The 500,000-square foot village continually reinvents itself to stay modern and relevant, undergoing several renovations over the years.

While six square blocks of brick, mortar, concrete and glass bring customers here, all that hardscape needs the softening touch of landscaping. So in 2006 they hired Greenscape Inc. to pack a visual punch with flowers.

“Cameron Village wants people to talk, they want to create interest,” says Leslie Herndon, the vice president of operations at Greenscape in charge of the Cameron Village contract. “They want big and bold. And that’s what we love to do.”

Cameron Village has a floriculture-only contract with Greenscape Inc., to install and maintain flower beds, planters and living walls. (More on the stunning living wall features later.)  They’re one of the only area landscaping companies to do floriculture only, without an accompanying maintenance contract.

“This is an urban market — there isn't a lot of landscaping,” says Herndon, a floriculture expert. “So they need to maximize their space with color.”

That means a whopping 160 large-scale planters on the property. Don't expect run-of-the-mill plants. These hip-height planters are designed to impress.

They feature exotic palms, bird of paradise, hibiscus, shrimp plant, elephant ears and dramatic ornamental grasses. These stunning tropicals anchor the planters from May through the summer months. Then, in October, pansies, violas and evergreens take over. 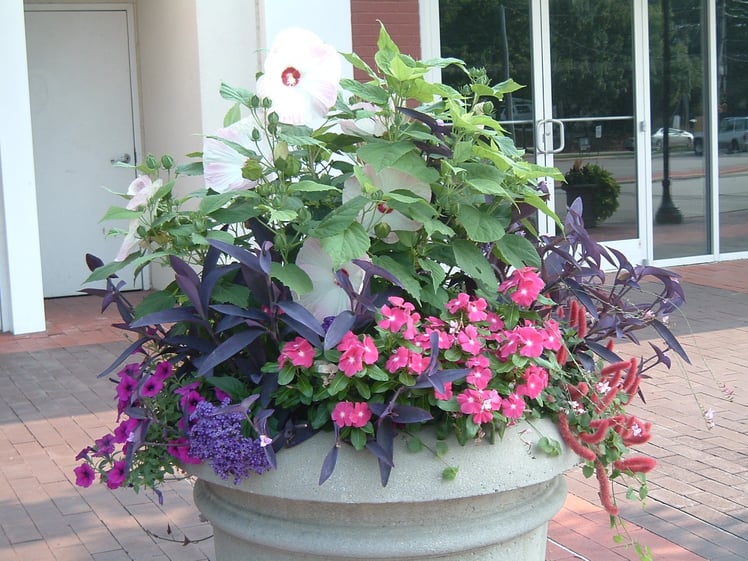 Flower beds throughout the property feature more tropicals, grasses, lantana, begonias, daisies and angelonia. The village’s entry signs are low, so low-growing plants are key here, so as not to obstruct the signs. Vinca, lantana and begonias fit the bill.

Spring features an awe-inspiring explosion of colorful tulips — as many as 5,000.

“We really pack them in,” Kanik says. “People snap pictures of them and send them to us, telling us how much they appreciate them.”

The most talked-about floral feature here at Cameron Village is the array of innovative “living walls” — vertical gardens Greenscape installs each May. A highlight this year is an impressive 3-D hummingbird that begs you to ruffle its colorful feathers.

“People say the living walls are their favorite thing here,” Herndon says. “People like to touch them. They can’t wait to see what new ones we put in each year.”

A recent installation near the library was entirely edible, planted with fragrant herbs, crisp lettuces and juicy cherry tomatoes.

“Clerks at nearby shops would pluck sprigs of mint for their water,” Herndon says. “We like to push ourselves to do different things. This let people see where food comes from.”

One double-sided living wall is free standing, with a hole in the center. 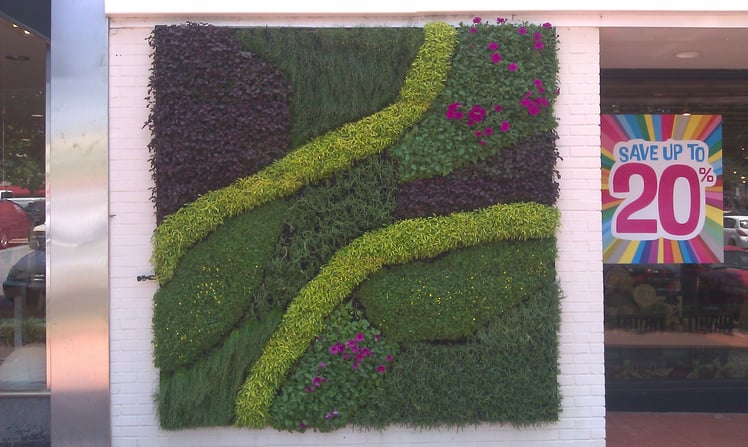 “People line up on weekends to get their picture taken with it,” Kanik says. “They encourage people to interact with their environment.”

It takes a crew of six to eight an entire week to install the intricate walls, Herndon says. They’re worth the time, effort and expense, Kanik says.

“They’re so unique and innovative,” he says. “They really grab peoples’ attention.” They also invite strolling — and shopping — as visitors walk the center to see the installations.

Kanik loves tying the living wall themes to community events. One year Herndon re-created “Twilight Venice” by Monet in flowers when the famous painting was at the art museum. When an Egyptian exhibit came to town, Kanik asked her to create an Eye of Horus, an ancient Egyptian symbol of protection and good health.

“They do a phenomenal job,” Kanik says. “Their tolerance for my eccentricity and their willingness to take on this kind of stuff is the most impressive thing about them. They’re willing to say, ‘It’s never been done before, but let’s give it a go.’ It makes a palpable difference here. People genuinely appreciate it.” 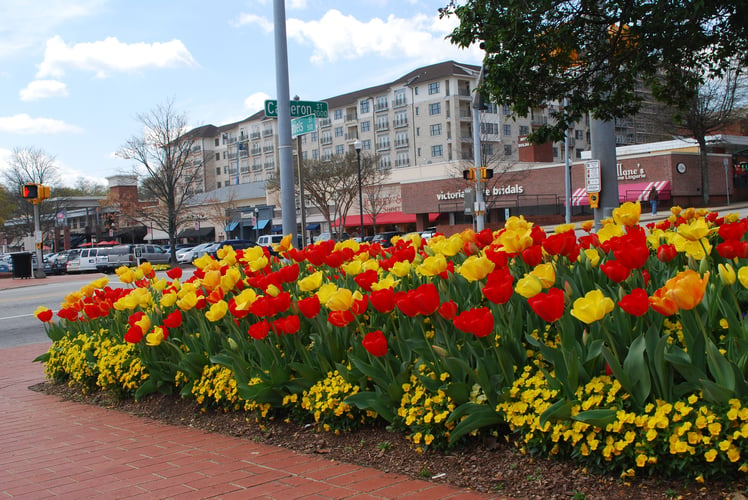 All these flowers need plenty of water during the sun-drenched summers, so Greenscape’s hand watering service is a key player here.

A crew person is stationed at Cameron Village full time, based in a Greenscape office on site. In addition to watering, she handles all the weeding, dead heading and mulch touch-ups, too.

“We spare no expense to have everything hand watered and to have plants that are the absolute best,” Kanik says.

A Matter Of Trust

Herndon says the Cameron Village account runs so smoothly, they only need to communicate with Kanik about once a month.

“There’s a high level of trust,” she says. “We know what their goals are, and they know we’ll handle it.”

“I don't have to think twice about it,” Kanik says. “I used to say to Leslie, ‘I want this and this’ and she’d do it. Now, I just say, ‘Dazzle me with something,’ and she does.”

Greenscape crews are sensitive to merchant needs. When they install flowers, they don’t park their trucks right in front, taking up all the parking spots. It means they have to walk more, hauling many carts of flowers, she says, but the feedback is worth the effort.

“In this business, there isn't always a lot of engagement with the landscaping,” Herndon says. “Here at Cameron Village, we get a lot of feedback. It makes us feel really connected to what’s going on.”

“Their care is obvious, top to bottom,” Kanik says. “They have it all covered.” 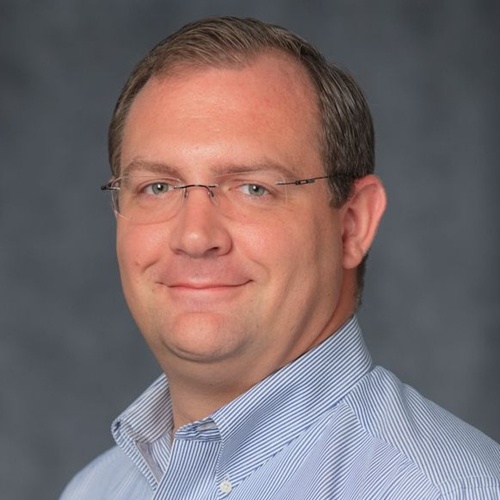 “They do a phenomenal job. Their tolerance for my eccentricity and their willingness to take on this kind of stuff is the most impressive thing about them.”